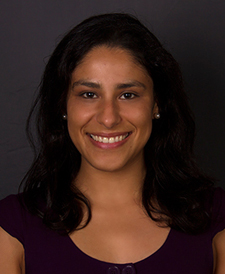 1. What motivated you to apply to the CHCI program(s), and why do you think they are important for Latino youth?

I was an eager young woman ready to be an agent of change for the Latino community. I wanted to influence policy by applying everything I learned academically as a student and personally as a Latina immigrant. I yearned to make a contribution, and I simply needed an opportunity to enter those critical decision-making spaces.

CHCI gave me that opportunity and much more. CHCI paid for my first cross-country flight, from Los Angeles to the East Coast. Suddenly, that young woman who spoke English with a heavy accent, cleaned houses and apartments, and who never wore office attire now worked alongside the most powerful people in the country and the world. CHCI was my first break into believing that I could really overcome barriers and be the professional I wanted to be.

CHCI’s most important asset are its people, and therefore the lessons that every young Latino learns during and after its programs are the collective values of dedication, solidarity, and leadership. The people that I met inspired me, and continue to do so as the years go by and I see ourselves evolving into leaders in our respective fields. I am sure everyone else who has and will complete these programs feels the same way.

2. What have you been doing since you finished the CHCI program(s)?

I am a Policy Counsel at Access, an international NGO that works at the intersection of human rights and access to technology. I am part of a global team that recently launched a set of international standards for governments, and I am training judges around the world on best practices regarding digital discovery and human rights. I wouldn’t be in this position had it not been for CHCI.

It was thanks to my CHCI fellowship placement at the Inter-American Commission at the Organization of American States that I found my vocation in international human rights. I stayed in D.C. to attend American University’s Washington College of Law, where I researched extensively on issues related to women’s rights and access to communications. I also obtained a law degree in Spain thanks to a partnership between American University and Universidad Alfonso X in Madrid. When I returned to the United States, I clerked for a judge in the New York Supreme Court and took part in a series of mediations and rulings that addressed the 2008 foreclosure crisis. The clerkship was extremely helpful in my development as an attorney, but I sought to return to the policy world. I subsequently worked for a network of state legislators from across the country drafting model legislation and assembling national and multi-stakeholder alliances. I was also the Director of Government Relations at Planned Parenthood in New York City, and before my current job, I consulted for Planned Parenthood Global where I co-wrote a report that was submitted to the United Nations’ Committee on Economic, Social and Cultural Rights.

3. What impact did your CHCI experience have on your career and development as a leader?

Without a doubt, I would not be where I am today without CHCI. As a CHCI fellow, I took summaries of the sessions at the Inter-American Commission on Human Rights; now I am preparing to litigate cases and draft reports before the same Commission. Ten years after starting my CHCI fellowship, I feel that I have come full circle.

4. How do you continue to give back to the community?

Every moment that I can, I give back to our community. Soon after moving to New York, I became involved with the local CHCI Alumni Chapter and had the honor to be part of its fierce all-women board.

Additionally, I take the time to mentor young women, in particular Latinas. Even in the work that I do, in international human rights and communications law, I bring to the forefront the issues of Latinos and their important role in US policies. Further, I find myself as a bridge between movers and shakers in Latin America and Latinos in the United States.

5. Where do you see yourself in the next 5-10 years, and what do you still want to achieve?

My dream has always been to support a women’s rights NGO in my native Peru – be it as a staff attorney, a board member, or a financial supporter. When I left Peru at the age of 12, I swore that I’d be back and that I’d give back. I longed to reconnect with the women who I left behind – women who had been raped or tortured, who had lost their families, and who were forcibly sterilized. As one of the fortunate ones who escaped, I felt I was charged with not letting those human rights violations go unaddressed. Hopefully, little by little I am getting there.

6. What advice would you give current and future CHCI participants?

I think that it is very important to have a sense of purpose, and be very conscious of each step that takes to get to this purpose. Having said that, I am a testament of the twists and turns that come into your life. With age, I have learned to confront these with grace.

I am reminded of something my very wise Latina mom says, “I am wonderful, but not Wonder Woman.” I try to do my best and be okay with my mistakes. My failures do not define who I am. I consider myself a successful person because I was able to learn from them.

Work hard, be cordial, and be strategic, but above all, be yourself, and don’t be afraid of your own potential.