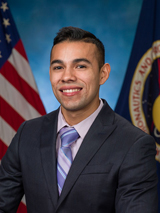 Felipe Valdez was born in Yuba City, CA, and he spent the first sixteen years of his life in Mexicali, Mexico. From early on, education was very important to him and his family. He worked hard throughout grade school to earn perfect attendance and to be on the honor roll.

Life in Mexicali was difficult; it was a place where most of the young people ended up dropping out of school and hung out with the wrong crowd. Fortunately, he had the best opportunity of his life to come back to the United States. Although leaving his parents in Mexico in order to continue his education was the hardest decision he has ever made, he knew the importance of education. So he took the challenge to start a new and better life: one with a different language, culture, and environment.

When he arrived in the United States, Felipe attended River Valley High School. He was an outstanding student during the two and a half years he was there, and learned the language faster than anyone expected – including him. Because of his persistence and constant effort, he not only overcame the language barrier, but also earned excellent grades. Felipe won awards for outstanding academic performance every term, was a member of MECHA club, and participated in many academic activities. As a first-generation student, Felipe’s graduation was a big accomplishment for both him and his family.

In 2013, Felipe graduated from Yuba College with an associate’s degree in mathematics and science while on the Honor’s List. As a Yuba College student, Felipe was a math and science tutor for MESA and the College Success Center, where he enjoyed helping other college students. He received the MESA Student of the Year and EOP&S Student Role Model awards, as well as numerous scholarships.

Currently, Felipe is an undergraduate at Sacramento State University, where he is a senior pursuing his bachelor’s degree in mechanical engineering. He is a very active student, taking part in organizations such as the Society of Hispanic Professional Engineers, MESA Engineering Program, Leadership Initiative Program, and the engineering honor society Tau Beta Pi. After graduating in spring 2016, Felipe plans to pursue his master’s degree in design and dynamic systems and eventually obtain his Ph.D. and teach at the college level.

In 2015, Felipe had the privilege to intern for two of his dream companies to work for: General Electric Oil & Gas in the summer and the NASA Johnson Space Center in the fall. Working as an intern, he experienced a real engineering job and put the skills he learned at school to practice. Felipe had a wonderful experience and was motivated to continue his career in the aerospace industry. He hopes to work for NASA in the near future.

Whenever Felipe encounters a challenge and things get complicated, he closes his eyes and reminds himself, “Sí se puede,” and tries his best to accomplish whatever seems impossible at that moment. Felipe acknowledges his aunt Rosa Valdez for being one of the most important people in his life. Her support, love and guidance helped him become a successful student and a better person.

Felipe is beyond grateful for being selected as the March 2016 CHCI Scholar of the Month and thankful for all the support that the Congressional Hispanic Caucus Institute has provided for him to accomplish his career goals. He believes that organizations like CHCI help make students’ dreams come true.