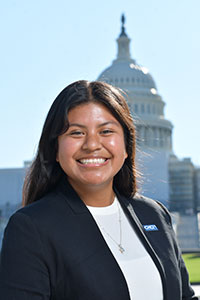 Fernanda was born in Encinitas but raised in Oceanside, both cities in San Diego County, California to two immigrant parents from Mexico. Having immigrant parents who left their country with basically nothing at an early age has helped Fernanda with developing a great work ethic and being ambitious to find her own path. Furthermore, she is a first-generation college student who enjoys volunteering her time to help out her community.

Fernanda is currently a sophomore at the University of California, San Diego majoring in Political Science with a concentration in Public Law. She has interned at the NAACP San Diego Branch in which she was a part of their legal redress committee that voiced cases of discriminatory complaints in her community and was assigned tasks that included writing memorandums, and setting up cases so their complaints could get help. After completing her undergraduate degree, she hopes to go on to attend a top law school. In the future, Fernanda hopes to become a Felony and Immigration Attorney to help immigrants know their legal rights and deal with deportation cases. Ultimately with her education, she wants to give back to her community that has helped her with her journey to achieve her aspirations.

As a CHCI Intern, Fernanda hopes to get familiar with what it takes to create change in our government. With this information, she hopes to help her community with a greater impact by using her experience in the future of her career.