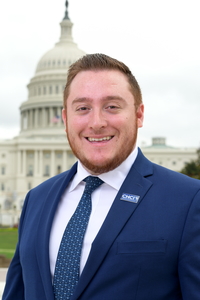 Born and raised in Phoenix, Arizona, Flavio understands the unique challenges that come with growing up in a border state. As a third-generation Mexican-American and first-generation college graduate, Flavio received a Bachelor of Arts in political science and philosophy of social justice from Loyola University Chicago and a Master of Arts in migration studies from the University of San Francisco.

During his time at Loyola Chicago, Flavio utilized his role as Student Body President to collaborate with cross-campus partners to establish a university-wide scholarship for undocumented students and regularly advises educators on how to better support immigrant youth nationwide.

While pursuing his graduate studies, Flavio served as a live-in volunteer at a migrant shelter in Oakland, California’s Fruitvale neighborhood. At the shelter, he taught ESL courses to community members and assisted recently arrived immigrant families find affordable housing in the Bay Area. He also lived and studied abroad in Mexico City and Cholula, Puebla, where he conducted research at the Ignacio Ellacuría Human Rights Institute focused on the international protections denied to Central American asylum seekers crossing through Mexico en route to the United States.

As a CHCI Housing Graduate Fellow, Flavio looks forward to learning and growing alongside other Latinx leaders while applying his education and advocacy skills towards creating more just and humane policies.