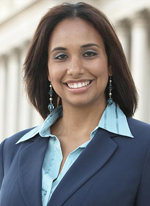 Frinny Polanco is a recent graduate of Brown University where she studied Community Health and Pre-Medical studies. Frinny was very active both on and off campus. As a Brown University student she studied at the Sorbonne in Paris, France where she learned about the French healthcare system and improved her knowledge of the French language. She served as a Women Peer Counselor (WPC) and a WPC representative. For the last three years, she served as the President and choreographer for Mezcla, Brown’s oldest Latino Performing Arts Group. She was also the Co-Chair of the Latin American Student Organization and the Diversity Co-Chair of the Senior Class Gift Committee. Outside of the classroom, Frinny served as an interpreter at Rhode Island Hospital and served as a teaching assistant for a public health course. At the Swearer Center for Public Service, she was a Breaks Project Leader for the Immigrants Rights Group and the Domestic Violence Group. This past summer Frinny worked as an Activities Manager for the Summer and Continuing Studies Department at Brown University. Due to her dedication to social justice and community service, Frinny received the Joslin Award, an award that is given to no more than ten seniors who have distinguished themselves through their involvement in campus life and student activities.

Frinny is currently doing her fellowship at the Office of Minority Health with the Health Resources and Services Administration. This placement has allowed her to get a first-hand view of life in the public health field. Additionally, her placement has enabled her to attend meetings for projects aimed at eliminating health disparities in the United States, especially those among the Latino community.

Education is also a very important issue for Frinny. Every week she teaches English as a Second Language to high school students at the Latino Student Fund. In addition, she tutors the parents individually to make sure they are fully engaged in their children’s academic lives.

Frinny is very passionate about the performing arts, especially dancing. During her free time she enjoys all types of Latin dance including salsa, merengue, bachata, samba and reggaeton. She recently joined the Georgetown University Ballet Folklorico Mexicano as a way of expanding her frontiers in the world of Latin dance. Aside from dancing, Frinny enjoys the theatre, and volunteers at the Gala Hispanic Theatre in Columbia Heights, Washington D.C. As an aspiring pediatrician with an emphasis in domestic violence and infectious diseases, she is currently preparing for the Medical College Admission Test.