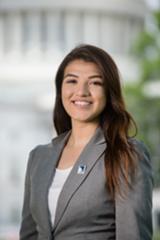 Born in Klamath Falls, Oregon, Gloria Ramirez is the daughter of Jose and Maria Ramirez. Gloria is the oldest of three children and is the first in her family to graduate high school and attend college. Although she has faced many obstacles, she is passionate about her education and is working hard to improve her migrant family’s life. She is currently attending Oregon State University in pursuit of a Bachelor’s of Science in Psychology. She is an advocate for diversity and inclusiveness in her community and feels that the opportunity to work in our nation’s capital will allow her to expand her knowledge and help members of her community get involved. Gloria is a firm believer that through education anything is possible. By learning about legislation from the country’s very own public servants, she plans to continue her initiative of diversity and work with the Hispanic population in Klamath Falls to encourage them to not only make their voices be heard, but also to pursue their aspirations much like she has.

As a CHCI and HEP/CAMP intern, Gloria hopes to build on her leadership and networking skills. With a strong belief that she is capable of doing anything she puts her mind to, she wants to lead others to success by working alongside a variety of people. Through the interactive training from CHCI and the support she receives from her HEP/CAMP family, Gloria is positive her time spent on the hill will result in lifelong relationships and personal growth.