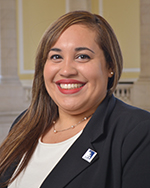 Heydi Correa-Encarnación was born in San Juan, Puerto Rico and moved to Bloomington, Indiana at the age of nine. Heydi graduated as a 21st Century Scholar from Indiana University (IU) in 2010 with a B.A. in sociology and Spanish, and minors in Latino studies and public health. She returned to IU to complete her M.P.H. in behavioral, social, and community health, where she graduated in May 2015.

Raised in a home of health professionals, Heydi was exposed to various aspects of the health care industry from an early age. As a scholar and public health practitioner, she has focused her efforts on health prevention and promotion initiatives for underserved Latino communities in Indiana, particularly through state health care systems and grassroots organizations.

Heydi has worked to uplift community members and elevate cultural competency through her involvement with organizations such as La Casa, City of Bloomington, Monroe County Community School Corporation ESL programs, and El Centro Comunal Latino. In 2012, Heydi became the only bilingual HIV health educator in Southern Indiana through the IU Health Bienestar Latino Project, serving a total of seven counties in providing HIV education, testing and counseling. Through Bienestar and several other subsequent opportunities, Heydi was able to develop a strong rapport with local Latino leaders and advocate for inclusive health care policies. Heydi has served on the advisory board of Bienestar, and was a board member for El Centro Comunal Latino and a health needs assessment researcher for Monroe County.