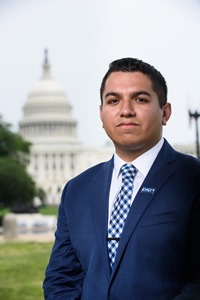 Humberto Ramos is a first-generation student from Phoenix, AZ, pursuing a degree in Government with an Emphasis in Legal Studies at Grand Canyon University (GCU). Being raised by immigrant parents from Nicaragua and Mexico exposed Humberto to multi-cultural backgrounds, which instilled him with pride of his Latino heritage and taught him to see the world from various perspectives. His mother immigrated to the United States in the 1980s, leaving Nicaragua during a time of political instability to seek a better opportunity in life. Her journey taught him that success is measured by the number of people he impacts positively.

Humberto was recently a finance intern for the Arizona Democratic Party, and performed political research and community outreach to involve constituents in the political process. He serves as the President of the GCU “We the People” government club, holding discussions based on controversial political, social, and economic issues within current events on campus.

Humberto plans on attending law school and aims to pursue public office to provide a voice to those in need. His desire to help people drives him toward achieving success, and his curiosity motivates Humberto to learn about his surroundings. One of his greatest inspirations is Albert Einstein, who once expressed, “Success comes from curiosity, concentration, perseverance, and self-criticism.”

As a CHCI intern, Humberto aims at developing his political and leadership experience that will aid him in bridging communities together to build a more inclusive society.