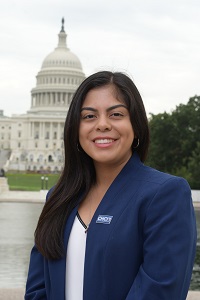 Irene grew up as a young woman of color of Guatemalan and Mexican descent in the West Phoenix Valley of Arizona. Her upbringing helped her recognize the social and racial injustices present within economically distressed communities. As a result, she made it her mission to not only advocate for her Latinx community but for systematically oppressed populations on an all-encompassing standard. Ultimately, she hopes to shift today’s media landscape towards becoming more diverse and all-inclusive by accurately representing the beliefs, issues, and perspectives of disenfranchised communities as a content creator, change-maker, intersectional thinker, advocate and media professional.

Irene is a rising sophomore majoring in journalism and mass communication with minors in digital audiences and social welfare at the Walter Cronkite School while serving as an honors student with Barrett, The Honors College at Arizona State University. As a low-income, first-generation college student and first-generation American, Irene believes in making the most of her education and every opportunity at her disposal.

In just her first year of college she has interned at the national civic engagement organization Mi Familia Vota, received the 10k Facebook Journalism Scholarship from the National Association of Hispanic Journalists, maintained two part-time, student-worker positions at her university and during the summer studied data and policy at the University of Chicago.

As a CHCI intern, Irene hopes to gain a greater understanding of policy making, how to further empower historically underrepresented communities, and what it means to hold our nation’s leaders accountable.