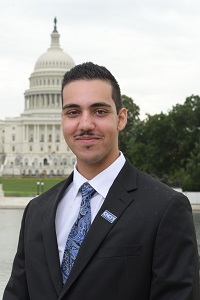 Isaac Hernandez is a first-generation college student of Puerto Rican descent and currently attends the University at Buffalo. He studies Political Science with a focus in International Affairs and he is also taking up a Spanish Minor so that he can one day initiate politics in a Spanish speaking country as a U.S. Diplomat.

From Cub Scouts to Eagle Rank, Isaac has been heavily involved in the Boy Scouts of America. By taking on leadership positions, he fostered strong morals and values and a desire to bring that level of integrity to International Diplomacy. During this time, he monitored the development of his peers and directed multiple service projects in his community. He was able to exercise further responsibility as a member of his College Hall Council, representing students living on campus, and as a Resident Advisor.

With family members employed in both the state and federal positions, the importance of having Puerto Ricans in government and the responsibility to pave the way for social mobility for Hispanics in the United States was instilled in him from a very early age.

Isaac believes that international politics are essential in solving the world’s biggest ordeals. Isaac also hopes to gain a deeper cultural understanding of the world and how its different values and beliefs tie nations together. As a CHCI intern, Isaac seeks to hone the skills needed to have a successful career in Global Politics.