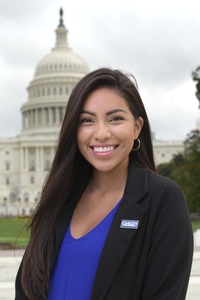 Isamar Garcia-Hernandez was born in San Bernardino, California and raised in Springdale, Arkansas. As the proud daughter of two Mexican immigrants, her motivation for everyday life is rooted in validating the sacrifices of her parents: two former strawberry farmworkers who would go on to see their daughter graduate as a first-generation college student from the University of Arkansas in Fayetteville. Isamar is most passionate about immigrant labor rights, public education, and criminal justice reform. Raised on the values of hard work, inclusiveness, and appreciation for her Mexican-American heritage, she believes that it is crucial for the Latinx community to be engaged and included in the very system that impacts their everyday lives.

During her senior year at the University of Arkansas, Isamar was elected to serve as the Student Body Treasurer with the Associated Student Government. As Student Body Treasurer, she lobbied for policy reform addressing sexual harassment and the opioid epidemic crisis on college campuses, specifically in the SEC. As a campaign organizer and legislative assistant for Arkansas House Representative Megan Godfrey, she assisted in drafting a policy memo on immigration reform. Specifically, she introduced Representative Godfrey to the issue of Deferred Action for Childhood Arrivals (DACA) nurse licensure, resulting in a bipartisan introduction and passage of HB1552, which now grants nursing licenses to DACA students in the state of Arkansas. These opportunities have allowed Isamar to have a seat at the same tables where critical decisions were being made for her community and reaffirmed her passion for public service.

As a CHCI Public Policy Fellow, Isamar looks forward to joining today’s most prominent and innovative Latinx leaders who are committed to elevating the voices of all who have chosen to call this nation their home. Her career goals include studying and advancing political engagement in fast-growing Latinx communities around the nation, specifically in her hometown of Springdale, Arkansas.