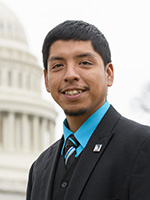 School: University of Illinois at Chicago

Israel Flores, a first-generation Mexican-American, was born and raised in Belmont Cragin, a working class neighborhood in Chicago, Illinois. His parents arrived to the United States in the early 80’s and established a small landscape company. Israel’s high school experience in the Chicago public school system showed him how education inequality can produce barriers that affect young people in his community.

After completing his associates degree at Harold Washington Community College, Israel transferred to the University of Illinois at Chicago. He is now a senior double majoring in sociology and criminology, law, and justice. With fellow sociology majors, he collaborated to organize the sociology club on campus and, as a founding member, and now as vice president of the UIC sociology club. He is a research assistant in the sociology department, working on projects exploring lynching and the transition to adulthood. In October of 2016, Israel presented his findings at the Annual Southern Demographic Association in Athens, Georgia. Due to the lack of programming for Latino Youth in his community, Israel has become motivated to pursue a career as a Youth Program Director, and a M.E.d in Youth Development at UIC.

As a CHCI Intern, Israel aims to strengthen his leadership capabilities, develop his knowledge of the political process, and expand his network. He hopes to use his experience to inform and empower his community with political awareness and to create collaborations, partnerships, and relationships with various disadvantaged communities.