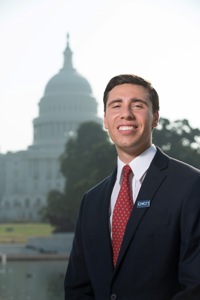 James Green was born and raised in Arlington, Virginia. Growing up as the son to a Guatemalan immigrant and a U.S. Navy Veteran from the Midwest, James learned the value of hard work economic opportunity, and public service from an early age. This upbringing manifested itself through his academic interests at the University of Virginia, where he graduated with a Bachelor of Arts in Public Policy and Leadership as well as a Bachelor of Science in Environmental Sciences in 2018.

During his undergraduate career James worked with a Charlottesville community college to foster a partnership with the University of Virginia and local renewable energy companies to provide solar energy workforce training. He also got to witness the federal legislative process and see Latino activists interact with elected officials and their staff as an intern in the U.S. Senate. In James’s last semester he interned in the Virginia House of Delegates, where newly elected Latina Delegates continually inspired him to empower growing Latino populations in Virginia and beyond.

James knows that his academic and professional achievements could not have been possible without the support and encouragement from his hard-working parents. As a Public Policy Fellow James plans on deepening his knowledge of the legislative process and environmental and energy policy. After the fellowship he hopes to pursue a career at the nexus of public policy, sustainability and economic development, particularly in the context of underserved communities.