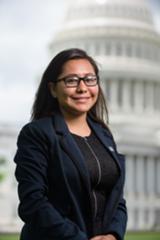 Janetci Arevalo is an undocumented, first-generation college student and the proud daughter of immigrants from Michoacán, Mexico. Living in a single-parent home, she went through financial hardship, which she has been able to overcome. She realized at an early age that getting an education was the only way to overcome poverty and decided to pursue a college degree. Her family is the driving force for her success. The perseverance that has brought her thus far will not cease until she has provided a better future for her family and achieved her goals.

Janetci is pursuing a bachelor’s in social work at Texas Woman’s University. By serving as the Secretary and Cohort Liaison for Phi Alpha Honor Society, she learned the real definition of teamwork and leadership. Due to her own personal experiences, Janetci has become an advocate for domestic violence victims and immigrants through organizations on campus.

As a CHCI Intern, Janetci plans to raise awareness of the problems affecting her community. Her passion for immigrant rights and domestic violence victims will help her advocate for oppressed communities.