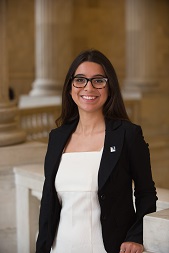 Born and raised in the historic city of San Antonio, Texas, Jasmin Palomares is the proud daughter of two Mexican immigrants. Her Mexican-American upbringing instilled a drive for social justice for underrepresented communities. Jasmin graduated with her B.A. in Public Policy with a minor in Computer Science and a Certificate in Latin American Studies and the Global South from Duke University in 2017.

While studying at Duke University, Jasmin helped lead organizations that focused on bringing awareness on a range of issues to the Latin American Community. She traveled to Honduras as part of the Project Health Education Awareness in Latin America (HEAL), joining a small group of researchers that focused on questions surrounding reproductive health. They partnered up with the non-profit Un Mundo to bring reproductive awareness by conducting ‘charlas’ or small talks on contraceptives and basic reproductive facts. In addition to health education, she also helped raise awareness on the realities of immigrant issues and provided legal support with Humane Borders by assisting Deferred Action for Childhood Arrivals (DACA) applicants during their application process.

Jasmin’s passion for education and drive for social justice for underrepresented communities has led her to take a hands-on approach. As a CHCI Public Policy Fellow, Jasmin hopes to incorporate her public policy degree and experience to the public-policy making process. She also hopes to gain more of an insight into areas of civil, health, and immigrant rights to improve policies and bring awareness to issues that affect the Latino community.