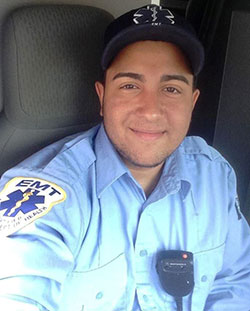 Jeremy is a sophomore at Seton Hall University where he is majoring in social & behavioral sciences with a minor in psychology. He is on a pre-med track with a goal of attaining a medical degree as a neurologist. As a freshman, he was selected as a member of the Seton Hall Martin Luther King Scholars program. This is a public servant and leadership program that advocates for several causes, including autism awareness and homelessness, to name a few.

At the age of fifteen, while volunteering at the Hoboken Shelter in New Jersey, Jeremy noticed many people lacked basic necessities like food and socks for example. This experience motivated him to take action, and soon after he founded Soxcess, Inc., a 501 (c)(3) non-profit. Soxcess offers those in need some essentials, including new socks and toiletries, along with providing food to shelters and other non-profits. Moreover, Soxcess has a prisoner re-entry program for people of Jersey City. Through Soxcess, Jeremy has been successful in partnering with both elected municipal and county officials, and with corporations such as Comcast, Target Stores, and LUSH Cosmetics.

Jeremy continues to serve as an emergency medical technician at the Hoboken Volunteer Ambulance Corps and the South Orange Rescue Squad. He is also a member of the Seton Hall Medical Brigade where he recently returned from an international outreach effort. Jeremy traveled to Honduras to provide medical care to the poor residents of a remote, mountain-top village. Prior to his trip, Jeremy solicited care packages from a Jersey City pediatrician and a dentist, both who provided medical supplies that were distributed to all who visited the field clinic. As the only EMT in his brigade, Jeremy worked with four doctors in assessing and treating over eight hundred patients, some of whom have never been seen by a medical professional.

Jeremy is a second year member of the Do Something.org Health Advisory Council. Here is where he offers input on related medical issues impacting young people throughout the United States – topics include youth obesity and healthy habits. As a Global Teen Leader for the We Are Family Foundation, Jeremy represented the United States at a Peace Summit. Along with twenty-nine other teens from eleven countries, these Global Teen Leaders addressed basic human needs and ways to improving the world.

He is a recipient of various academic awards and recognitions including the Comcast Founder’s Award; the Hispanic Business Council Scholarship; Coca Cola America’s Future Award; President Obama’s Presidential Award for Community Service; a proclamation from the Jersey City Office of the Mayor; a resolution from the New Jersey Senate; First Lady Pat Christie’s New Jersey Hero Award; and the Angela CARES Inc., Community Service Award. Most recently, he was awarded the 2015 New Jersey Governor’s Jefferson Youth in Service Award. As the recipient, he was chosen to represent New Jersey at the National Jefferson Awards in Washington, D.C.

Most recently, Jeremy volunteers for the Columbia Park Greenville Memorial, a Park located in Jersey City. There he takes part in community-based objectives in beautifying and maintaining the grounds.