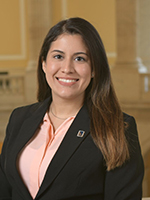 Born and raised in the vibrant city of Miami, Jessenia Guerra is the proud daughter of immigrants hailing from Nicaragua and Cuba. She became the first in her family to graduate from college, earning her B.S. in psychology from the University of Florida and her M.S. in educational studies from Johns Hopkins University. Jessenia’s passion for educational equity was fueled by her own early experiences and difficulties navigating the U.S. public school and higher education systems, as well as the values instilled by her community.

After completing her undergraduate degree, Jessenia returned home to become a Teach for America corps member and elementary school teacher. During her time as an educator, she developed as an advocate for communities of color and worked closely with other stakeholders to improve academic outcomes for her students. While teaching, Jessenia helped to establish an affinity group for Latino Teach For America corps members and led the group in building ties with the immigrant movement in Miami. She created partnerships with groups, such as the United Teachers of Dade (UTD) and the Florida Immigrants Coalition (FLIC), that led to the training of participating corps members in DACA, DAPA, and in-state tuition for undocumented students. Before joining Teach for America, Jessenia participated in the Harvard Kennedy School’s Latino Leadership Initiative and helped create a series of leadership workshops for first-generation American Dream Scholars from Miami Dade College.

As a CHCI Graduate Fellow, Jessenia hopes to build a better understanding of education policy in order to promote the successful participation of Latinos in the STEM fields and she looks forward to working with policymakers who are passionate about Latino advancement.