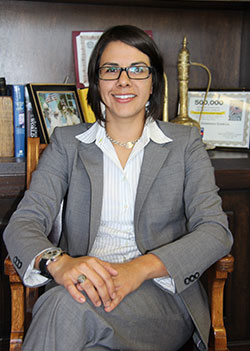 I think for me some of the biggest challenges arose from being raised by traditional Mexican parents and the youngest of four. Specifically in that by being the youngest and female, there were both internal and external expectations of me that made it difficult for me to make decisions freely, such as pursuing a higher education that required me to move away from home. This was further exacerbated by the fact that my parents were raised in Mexico and did not have an understanding of the American education system. In addition, my parents started a Mexican snack business when I was five and was always expected to dedicate myself to our family business after graduating high school.

I first heard about the Law Graduate Fellowship while interning at the U.S. Department of Justice during my third year of law school. After asking around and doing a little research, rumor had it that the competition would be fierce. Aside from always liking a good challenge and having the “I have nothing to lose” mindset, I felt confident that my application and academic record would make me a competitive candidate. I also give much credit to mentors that believed in me throughout the years and taught me that no goal or dream is too big; some of us just have to work a little harder to get there.

I think programs like CHCI are important for Latino youth because it exposes them to world of life experiences and opportunities that they otherwise would not have the method or means to do on their own. Being away from home for an extended period of time can be particularly difficult, especially for those coming from traditional close-knit family units, but its important to know that it is only temporary and the return is worth it all.

At the conclusion of CHCI I extended my placement at The White House for an additional month while I explored potential career opportunities in D.C., before having to make the final move back to Dallas. During a planned trip home to welcome my new niece, I received a call from the Obama re-election campaign informing me that they had read my CHCI White Paper entitled “New State Voting Laws: A barrier to the Latino Vote?” and if I was interested in interviewing for a position they believed was fitting. After undergoing a series of interviews, I agreed to serve as the Statewide Voter Protection Director and moved to Las Vegas, Nevada, for the remainder of the year.

After five years and three states, I decided it was time for me take what I learned back to Dallas and begin laying more permanent roots. With the ambition to open up my own practice one day, I decided to focus my career on gaining concrete litigation experience. After two years of being a trial lawyer I decided to partner with a colleague and open up our own practice- Gandara & Gonzalez, PLLC, which has now been up and running for a year and a half.

Aside from it generally improving my sense of confidence and exposing me to the world of domestic policy, the impact my CHCI experience had on my professional development can be better described through actual examples in which I applied the knowledge I gained from specific programming.

For example, the workshop on salary negotiation provided me with the skill to confidently and successfully do so when confronted with job offers that followed. In addition, the graduate specific programming related to our white papers helped neutralize some of the fear I still had on speaking publicly, improved research and writing skills, and allowed me to develop an expertise on voting rights, which directly lead to my next position as the Nevada Voter Protection Director.

One of the unique benefits of practicing law and being self-employed is that it allows the freedom and ability to give back in a way that is both impactful and personally gratifying. I’m able to do this through my firm by either by providing free consultations, pro bono or low cost legal services to those who have difficulty accessing the legal system or otherwise forgo it altogether due to socioeconomic, immigration, or language barriers. In addition, my law firm frequently accepts invitations to speak or hold workshops at neighboring schools for both student and parents.

Further, after rejoining Stonewall Democrats of Dallas Board as an At-Large Member in 2013, I have remained active in helping the organization carry out its mission, which of which includes the promotion of economic justice and social progress in the LGBT community and encourage participation thereof. Aside from serving a second term on the Executive Board of Stonewall as Secretary, I frequently volunteer and support local candidates who share an interest in revitalizing and bringing positive change to underrepresented Latino communities.

With recently purchasing my first home and starting my own law practice, I honestly don’t expect to make any life altering changes any time soon. My plan to continue investing my time and focus on the growth and success and of my law practice for many years to come.

I still intend to run for office in the future and hope to position myself to successfully do so in the next few years.

I think the best advice I can give current and future CHCI participants is to try and maintain confident and never underestimate your ability, despite how intimidating and foreign a new environment will seem at first. When in doubt always remember that – out of many top applicants, wishing they were in your shoes—it was you that was selected and for a good reason. Relatedly, keeping an open mind and maintaining a sense of humility are also of equal importance, because without them you risk missing out on what’s right in front of you.