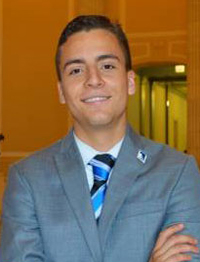 Jesus Guerreros Vega-Arzola was born in a small village in Durango, a mostly rural state in the northern region of Mexico. Jesus experienced some complications at birth that could have been easily resolved at a well-equipped hospital. However, the hospital in Durango was severely under-resourced, and Jesus nearly died as an infant. Within six months, Jesus and his mother attempted to immigrate to the United States, with disastrous results. During the chaotic border crossing, Jesus and his mother nearly drowned, and half of the group was arrested. It would take nearly five years before he and his mother would successfully make it to the U.S. After a few years of legal processing, Jesus and his immediate family gained legal American residency.

In addition to being grateful to his mother, Jesus also admires his step-father Misael. Misael came to the U.S. as a young Colombian immigrant and started his own successful business in Detroit that has since gained regional prestige. Misael’s positive impact on Jesus’ life has been immeasurable. Seventeen was a truly tumultuous age for Jesus, full of highs and lows: he became an American citizen, and realized that divorce would be inevitable for his now ex-stepfather. These life experiences have instilled within him many values and goals.

Jesus is currently a senior at Michigan State University double majoring in international relations and economics. During his college years, Jesus has participated in alternative spring breaks to Mexico, during which he worked at a home for the elderly and a day care center for impoverished children. These excursions had a profoundly positive impact on Jesus and led to a great deal of self-realization. Following his undergraduate career, Jesus hopes to work in policy and attend the Autonomous National University of Mexico (UNAM) to pursue a master’s degree in economics. Ultimately, Jesus hopes to become a regional director for the United Nations Population Fund in Latin America.

Jesus is thankful for being selected as a 2014 CHCI Scholar and for his recent summer experience as part of the 2015 Congressional Internship Program (CIP). As a CIP Intern, Jesus was placed with Michigan Representative Sander Levin. This opportunity gave Jesus the chance to get hands-on experience with the workings of the federal government and participate in the D.C. political arena. To showcase his experience, Jesus created a video documentary as he went through this transformational experience that connected him with other young ambitious and like-minded Latinos, empowering him through knowledge and a new network. As a CHCI pipeline scholar, Jesus is truly grateful for the ongoing support. He now feels ready for better and bigger achievements.