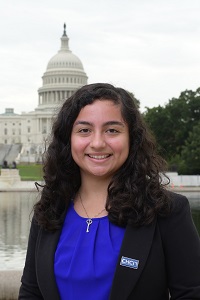 Jocelyne was born in El Salvador and was raised in Jacksonville Florida since she was four years old. Both of her parents left El Salvador due to the ongoing violence and poverty in the country. Raised in a close-knit family her parents have always supported her aspirations to study law.

Jocelyne attends the University of North Florida (UNF) and is pursuing a degree in Political Science (public law) and Spanish. At UNF Jocelyne has been involved in Student Government as Chief Justice of the Judicial Branch. She has also stayed involved in community service and local government.

Jocelyne’s ultimate goal is to defend immigrants that cannot afford legal services. She plans to focus on helping immigrants seeking asylum from countries that do not protect women’s rights.

As a CHCI intern, Jocelyne hopes to learn more about the legislative branch and inspire other Latinos to get involved in government and politics.