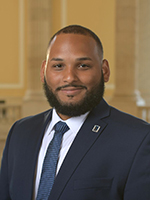 John Liriano was born and raised in Boston, Massachusetts. He is the son of a Puerto Rican Mother and Dominican father. While in college he developed a profound interest in social-cultural ideologies/practices and its impact on public health, as well as social justice and individual empowerment. He received his B.A in anthropology from the University of Massachusetts Boston (UMB).

While at UMB he was involved in the Casa Latina where he helped organize multicultural events and worked in the Student Support Services center. In addition, he interned and later worked at the Boston Public Health Commission. As an intern he helped individuals and families get connected with free and subsidized health insurance. He participated in outreach events connecting Boston residents with many resources and services. Later as an employee, he played a role in the Anti Racism Committee assisting in changes to policies and procedures within the organization. He also educated small business owners and workers on the importance of environmental and occupational health.

As a CHCI Public Policy Fellow, John hopes to enhance his understanding of public policy and its development. This fellowship will enable him to contribute to his community by teaching him skills on the full spectrum of laws and policies that often affect him and those around him.