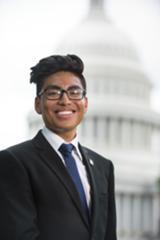 Jorge Lema is a first-generation college student from Brooklyn, New York. His parents are immigrants from Ecuador and always emphasized the importance of education since they were unable to receive one. Jorge recognizes that his successes are linked to the privileged public education he received and, as a result, he is passionate about combatting the institutional forces that disadvantage historically marginalized groups, specifically low-income Latinx people.

Jorge is a political science major and an Education Studies Scholar at Yale University. On campus, he is involved with Yale’s Latinx Cultural Center, La Casa. He is a proud Hermano of the Kappa Chapter of La Unidad Latina, Lambda Upsilon Lambda Fraternity, a multicultural Greek fraternity whose philosophy is to help Latino students enter higher education. Jorge also works as a Yale Campus Tour Guide and Recruitment Coordinator with the Yale Office of Undergraduate Admissions. As a Tour Guide and Co-Head of Recruitment and Engagement for the program, Jorge welcomes prospective students of all backgrounds to campus, dispelling the notion that all Yale students are wealthy and demographically homogenous. As a Recruitment Coordinator, he performs outreach to low-income communities of color, encouraging them to learn about and apply to Yale, and recruits accepted students, informing them of resources available at the university.

As a CHCI Intern, Jorge hopes to learn how decisions that impact low-income communities of color are made. Specifically, he wants to understand the legislature’s role in the creation of policy and the impact that politics have on marginalized groups in the present and future. After graduation, Jorge plans to attend law school so that he will be equipped with the tools to serve his community.