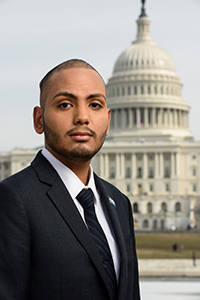 Jose Steven Guevara was born in San Salvador, El Salvador. At the age of ten, he immigrated to the United States. His father migrated from El Salvador after the aftermath of the civil war. His mother migrated after the earthquake of 2000 that shook the country of El Salvador. They have both benefited from Temporary Protection Status and have an impeccable work ethic that they have instilled on to their only child. Jose is completing his bachelor’s degree, majoring in Political Science and a minor in Gender and Sexuality.

Growing up in Los Angeles, Jose came out as gay at fourteen. A year later, he was diagnosed with acute lymphoblastic leukemia. He has since relapsed four times, the most recent relapse December 2017. He has been affected by the termination of Temporary Protection Status and the Deferred Action for Childhood Arrivals, putting his parents work, his insurance, and his immigration status in jeopardy. His hardships have pushed his work for advocacy. He plans to pursue a Master’s degree in Public Policy.

As a CHCI Intern, Jose hopes to strengthen his advocacy skills, as well as develop a deeper understanding of federal policy. Ultimately, his focus is on intersectional policies that prioritize Healthcare for people with life treating conditions, Queer rights, and comprehensive immigration reform.