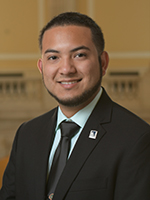 Jose is a proud immigrant originally born in Santo Tomas, Chontales, Nicaragua. As an eleven-year-old, he migrated to Miami with his older sister to reunite with his mother and his step-father, who raised him and he considers being his father. As a low income working class family, Jose’s parents emphasized education and motivated him to learn English in less than two years, going on to graduate in the top ten of his high school class. He was the first in his family to graduate from college when he received his degree from the University of Florida (UF). The education at UF not only provided academic experience but also personal growth and passion for advocacy.

As an undergraduate, Jose got the chance to work with the Institute of Hispanic Latino Cultures where he got the chance to learn about issues affecting the immigrant and the Latino communities. He got his first experience with politics when he interned in a campaign in college. After graduation, Jose returned to Miami to teach high school ELA and ESOL as a Teach For America Corps member. This past summer Jose was part of a Policy and Advocacy Fellowship with Leadership for Educational Equity in Indianapolis. At Enroll Indy, he worked to bring unified enrollment to the city as part of the Community Engagement and Outreach team.

As a CHCI Public Policy Fellow, Jose hopes to gain a better understanding of the legislative process and policy making. He hopes to use this knowledge, skills, and resources to work on promoting and advancing the increased civic engagement from Latinos.