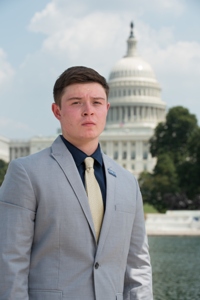 Jose Romero identifies zealously as Chicano, with both sides of his family solidly rooted in southern Colorado and New Mexico from before the cession of the Southwest from Mexico. Born and raised in Southwest Denver and growing up as a Chicano, Jose’s experienced what it is like to feel like a foreigner in one’s homeland, facing a cultural ambivalence as “too Americanized” yet “too Mexican.” This ambivalence plagued Jose as he grew up but also made him proud of his familial roots.

Jose’s fervor for civic engagement is fueled by his family’s substantial involvement in the Chicano Movement during the 60’s and 70’s. His family founded the Crusade for Justice in Denver, Colorado, which partnered with the Black Panthers and the American Indian Movement during their fight for civil rights, and led the Southwest leg of the Poor People’s Campaign in D.C. in alliance with Martin Luther King, Jr.

Jose studies political science as a first-generation student at Metropolitan State University of Denver, maintaining a 4.0 GPA. Jose participated in a program under Denver Public Schools that placed students in career-oriented internships, working for an attorney at Littleton Immigrant Resource Center and volunteering as an English tutor for the center’s Language Partners program. For the past 2 1/2 years Jose’s worked as a youth mentor for the Journey Through Our Heritage (JTOH) Program within the Chicana/o Studies Department at MSU Denver. Additionally, Jose secured grant funding in the past two years for a summer camp JTOH administers, serving low-income children by providing them with a free, culturally competent summer camp.

Recently Jose interned for the Department of Homeland Security at the U.S. Citizenship and Immigration Services Denver Field Office, an experience that provided him meaningful insight into immigration law and the emotionally and financially daunting process of pursuing U.S. Citizenship under an anti-immigrant administration. As a CHCI intern Jose hopes to gain comprehensive insight into the federal legislative process, and wants to gain new perspectives via CHCI’s leadership trainings demonstrating how to empower Latina/o communities. As an enormous contingent, it is imperative for Latinas/os to show power in numbers through solidarity.