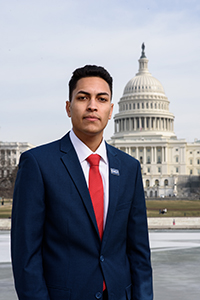 Jose Sanchez is a first-generation college student at Northern Kentucky University double-majoring in International Studies and Spanish with a minor in Latin America and Caribbean Studies. He was born in Brooklyn, New York, however, he spent his early childhood in the Dominican Republic where he was raised by his grandmother. Upon returning to the United States at the age of seven, he found himself in Kentucky where his mother had relocated to.

As a member of the Youth Educating Society (YES), which focuses on empowering young leaders to be informed on the current immigration issues, he has had the opportunity to meet and rally with many powerful local leaders. Like immigration, another one of his passions is higher education. Higher education was always pushed upon him because his parents did not have the opportunity to continue their education. His mother’s hard work and dedication to providing him with a better future instilled in him a strong sense of motivation.

As a CHCI intern, Jose hopes to expand his network, increase his skillset in order to better address the needs of the Latinos in his community and to gain experience on how legislation is created in our country. After CHCI, Jose will be returning to Kentucky for graduation and prepare to move to Ecuador where he will serve as a Peace Corps volunteer.