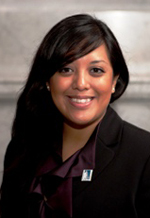 Placement 2: The Office of Rep. Andre Carson (IN-7)

Josefina Villanueva is a first generation Mexican-American, who was raised Hammond, Indiana. She received her B.A. in Political Science from Butler University in Indianapolis, Indiana.

Josie was very active in the Student Government Association, serving as the Diversity and Student Affairs Coordinating Chair for the Council of Presidential Affairs – a group that worked as a liaison between the needs of students and the university’s administration. She was able to serve the community through internships with non-profit organizations such as the Indiana Civil Liberties Union and La Plaza, Inc. Her administrative work with La Plaza allowed her to assist in planning educational and cultural opportunities for over 100 children participants, ages 5 – 12, in the Summer Discovery Enrichment Program. As

An advocate for diversity and progress, she served as President of the Latinos Unidos Student Organization, in which she was responsible for coordinating cultural and educational programming for the entire campus.

As a CHCI Public Policy Fellow, Josie is committed to working with immigration, health, international and educational concerns, while gaining a unique experience in the policy making field. Her future plans include attending law school and working professionally in immigration and international law.

Congratulations to Villanueva on securing employment in the office of Senator Richard Durbin.