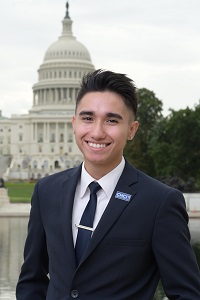 Joshua was born and raised in the town of Hacienda Heights outside of Los Angeles, California. Growing up the youngest of five, he was taught from an early age that education was both a way to help himself achieve his goals in life and a tool to uplift his community and home. Joshua has interned previously for California Assembly Majority Leader Ian Calderon and has worked on several political campaigns including Congresswoman Grace Napolitano’s re-election campaign in 2016, and Gil Cisneros for Congress in 2018.

Joshua is currently a junior at the University of California, Los Angeles majoring in political science with a concentration in U.S. politics. He has been active in student government for the past two years, coordinating such initiatives as BruinsVote! which registered thousands of students in 2018 and increased student voting rates by over 300%. Joshua has also led lobbying trips to California’s state Capitol in Sacramento where he has advocated on behalf of University of California students to state legislators on the issues of increased funding for higher education, mental health and reproductive services, gun control, and protections for undocumented students.

All these experiences have taught him how to speak truth to power, and that community is the most important thing to make substantive change. As a CHCI intern, Joshua hopes to learn more about the legislative process, future career paths within government, and how to protect LGBTQ rights at the federal level.