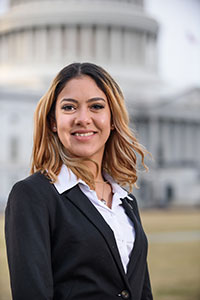 Josuán Del Valle Rivera was born and raised by her parents in San Juan, Puerto Rico, and is majoring in Advertising and Public Relations at the University of Puerto Rico, Rio Piedras Campus.

When Josuán was 15 years old, she decided to join the Puerto Rico Institute of Robotics with three other schoolmates, going on to win a national competition and later represent Puerto Rico in the Vex Robotics World Championships in 2010. Inspired by the experience, Josuán went on to study aviation when she was 16 years old and earned her Private Pilot Certificate in 2013.

Josuán’s drive to learn new things drove her to attend college and study communications. She’s working towards becoming a Director of Photography for films and TV, and plans to one day study in the New York Film Academy to make her own movies and documentaries.

As a CHCI intern Josuán wants to develop new communication techniques, and learn more about how communications are managed in a political environment. She also wants to use her voice and influence to help the Hispanic community during her time on Capitol Hill.