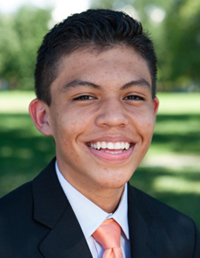 February 2014 Junior Alumnus of the Month

Since graduating from CHCI’s 2012 R2L NextGen program, junior alumni Juan Daniel Ramos, a senior at McArthur High School in Irving, Texas, has soared to new heights. “After the program I returned to Dallas more motivated and empowered than ever before,” says Juan Daniel. He credits CHCI for helping him build the self-confidence he needed take his academics, personal enrichment and community service activities to the next level.

Upon his return home from Washington, Juan Daniel met with his high school guidance counselor, requesting to be enrolled in Advance Placement (AP) classes. Since all of his previous academic courses were for English Language Learners (ELL), his request was initially met with resistance. But his persistence and self-advocacy paid off – during his junior year he completed AP American History, passing the College Board AP exam with flying colors. Now in his senior year, Juan Daniel continues to be enrolled in the AP program.

In addition to academics, Juan Daniel joined school groups such as DECA and The Network for Teaching Entrepreneurship. Pairing his entrepreneurship skills with his interest in American history (which began with his visit to D.C.), Juan Daniel helped co-create a computer game called Better than History. The game “allows players to step into the shoes of key historical figures and consider alternative endings to major events in U.S. history.” Juan Daniel and his co-creator have participated in various local, district and regional competitions with aspirations to further develop the game and one day sell it in major retail stores.

Juan Daniel has also spent time raising awareness on pressing issues in his community, including helping to organize the Rally Against Domestic Violence in Dallas, and is currently planning a college readiness conference at his school. “Students will receive advice on college applications, how to fill out the FAFSA and read their parents income-tax statements. These are all things I had to learn on my own,” explains Juan Daniel.

Despite his busy schedule, he is focused on college. Juan Daniel has already received his first college acceptance letter and is waiting to hear from several others. Raised by a single mother who made extra sacrifices to provide the best for her two children, he is excited to continue his education. “I’ve had to do most of this on my own,” she says, “I don’t want to burden [my mother] with more things to do and I want her to be proud of me, so I just do whatever it takes to make things happen.”

Participation in CHCI’s R2L NextGen program was a turning point for Juan Daniel. “I came home a changed person. I was inspired by all of the Latino professionals who I met during R2L NextGen and they all helped me believe that I was capable of fully reaching my potential. With a little motivation, support from a few caring individuals, persistence and hard work, anything is possible!” CHCI is proud to have Juan Daniel a part of the CHCI familia!