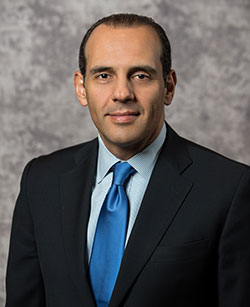 1. Many CHCI alumni and current program participants have battled and continue to battle common challenges as they strive to become Latino leaders in their communities: living and working in low-income communities, some in single-parent households, as recent immigrants, DREAMers, or first-generation American citizens. What challenges did you have to face to get to where you are today?

I moved to the US at the age of 15, lived in a low-income community of Boston, spoke no English and felt firsthand what it truly means to be a poor immigrant in this country. I grew up attending underfunded and, to be honest, uninspiring schools. Despite the obvious challenges, and thanks in large part to the support of many wonderful people, and organizations such as CHCI, I was able to work my way up, to become the first college graduate in my family, which under the circumstances was a major accomplishment in itself.

I have always been interested in politics and government, so it was quite natural for me to study political science in college. During those years I interned for multiple state and local political campaigns. I also worked full-time during my senior year for Boston City Hall, where I discovered the most effective way to change what you don’t like about a system, or to combat social injustices, is through dedicated political activism. I wanted to learn more about how our government functions, and understand how the political world really works in the nation’s capital. It soon became clear to me that CHCI could give me the experience and knowledge I needed to help promote the changes I felt were vital.

I have been very fortunate to be involved in many different and exciting opportunities and projects. I served in both the Bill Clinton and Barack Obama’s administrations, most recently as the Deputy Assistant Secretary for Europe at the Department of Commerce. I have worked on 14 different national, regional and local election campaigns, and served as International Co-Chair for the Obama re-election campaign. I also founded my own CHCI-inspired, not-for-profit organization, the Advanced Leadership Foundation (ALF), and established the Spanish Office of the Climate Reality Project. Through my work in both the government and private sectors, I have had the honor of working with tremendously talented fellow CHCI alums who continue to blaze trails for future Latino/a leaders.

Without a doubt, my involvement with CHCI was the most important event in my life. It was a springboard for me, a game-changing opportunity, and truly the catalyst that launched my career and reinforced my passions. I have always felt indebted to CHCI for this. My own foundation is modeled after the CHCI mission — what it has done for Hispanics in this country – aiming to do for disadvantaged young professional leaders from other countries what CHCI did for me. ALF is creating a global network of inspired and empowered future leaders with the ultimate goal of helping them gain the skills and experiences needed to benefit their communities, their companies, and their countries.

I don’t know that I can ever really match the impact that CHCI made on me, but I do try to give back to the community by contributing to numerous scholarships and causes that promote Hispanic educational development and political empowerment. I mentor young Latino/a leaders and use my position at ALF to try and make a positive difference in the world. That said, I would be honored to become more involved in the invaluable work CHCI does for the Hispanic community.

I suppose the most effective way to predict the future is to review the past. By looking at the work I have done over the previous ten years, and considering my former successes, it seems the common denominator has been the passion I feel for my work, the projects I undertake. In a way, I’ve had to reinvent myself on numerous occasions, never shying away from the imperative to change! In ten years I imagine I will be doing something entirely different from my work today, but one thing will be a constant. I will be guided by the same sense of dedication and passion.