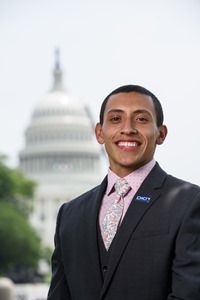 Juancarlos Ayala was born in Santa Monica, California. He comes from a military family, and has grown up watching his parents strive for greatness as their environment changed at least every 4 years. Watching his father succeed as a Puerto Rican American in the United States Air Force, and his mother, a Mexican immigrant, support his father all the way, led him to seek success through determination, hard work, and integrity.

Juancarlos is pursuing a bachelor’s degree in Political Science with a minor in Marketing at the University of Texas at Rio Grande Valley. He currently works as a Marketing Director at local small business, and is involved in the UTRGV Pre-Law Society. Juancarlos hopes to attend law school at the University of Texas at Austin and serve his country in the United States Marine Corps as a JAG officer.

As a CHCI Intern, Juancarlos looks forward to representing the best of the Rio Grande Valley, and working hard to improve his knowledge, while developing the tools needed to impact his local community. Juancarlos is ready to bring the discipline instilled in him by a military family to the CHCI internship, strengthen his leadership, and build relationships with his mentors and peers.