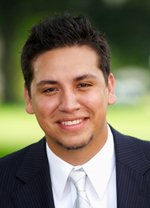 Julio Costa graduated from the University of Illinois with a BA in Political Science and a minor in Spanish. Born in Lima Peru, Julio immigrated to the United States at the age of 2 and settled in Chicago.

His passion for public policy began when he was granted the opportunity to intern for Congress in the fall of 2007. Through the Illinois in Washington program at his university, Julio interned at the Office of Congressman Luis V. Gutierrez (IL-4) in his Washington D.C. office. Julio juggled a full-time course load and internship but was rewarded with a very insightful experience on issues relating to immigration and housing. Upon completion of his internship, Julio visited his native land of Peru to assist families that have been displaced after the country’s infrastructure suffered a severe blow following a massive earthquake.

When Julio returned to school, he became immersed in the current political climate of that time: the Democratic primaries. He became an active member of Students for Barack Obama and was responsible for canvassing around the Midwestern states, phone banking, and registering voters.

In the summer of 2008, Julio had a unique opportunity to work for the largest industrial labor union in North America, The United Steelworkers (USW), in Pittsburgh, PA. Due to his familiarity with labor issues and Spanish, he was offered a position to work on a special case in the Los Angeles area. Through the Health Care Workers Council, a group created to support local health care union within the USW, Julio played an integral role in an effort to rehire an entire department of workers, primarily Latinos, who had been “outsourced” for “cost cuts” in the midst of seeking union representation. The appeals process gave Julio an insight into a broken system in desperate need of reform. His duties included: translating union literature for employees, canvassing to promote union benefits, setting up resume workshops, and most importantly helping the outsourced employees with whatever they needed.

Julio finished up his collegiate career involved in various groups and activities focused around giving back to the community. He worked with his fraternity, Beta Theta Pi, to raise money for the American Heart Association. He was also enrolled in coursework that allowed him to volunteer in the university community. Through his Spanish and Entrepreneurship class, Julio had the opportunity to work with kindergarteners at a local elementary school. There he also served as a translator for Spanish-speaking families during parent-teacher conferences.

As a Public Policy Fellow, Julio hopes to understand how policy is formulated within the legislative chamber. He also seeks to gain insight on labor issues important at the national level and to study the loopholes that have allowed employers to abuse the labor process without repercussion.

Julio’s interests include traveling around the world and a wide variety of sports.