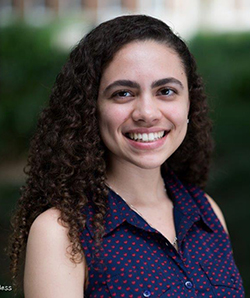 October 2016 Junior Alumnus of the Month

Kaitlyn Montan, a rising senior at Southern Methodist University, has learned to overcome the challenges in her life and use them to build up her own success. As a child and teenager Kaitlyn was forced to move from state to state multiple times, and while this could have been a deterrent to her success, she instead used it as motivation. Since Kaitlyn moved so often, she did not grow up with her extended family, and sometimes felt disconnected to her Latino roots. Despite this feeling of alienation, Kaitlyn decided to participate in R2L NextGen and after this she began to reconnect with the Latino culture. Kaitlyn sets a great example for other students who chose to push beyond and be successful in the face of adversity.

Kaitlyn has continued her academic success throughout her past three years at SMU. She is a double major in Political Science and International Relations and also is planning to minor in Spanish. Not only does she have a rigorous academic schedule, she is excelling in all of her scholastic endeavors. Kaitlyn has received a variety of scholarships and awards celebrating her achievements and is a part of Phi Beta Kappa, a prestigious honor society.

Aside from academics, Kaitlyn participates in multiple activities to hone her leadership skills. These include being a Residential Assistant at her university, working as a tutor, and being the Hospitality chair of a servant leadership organization. As a strong supporter of women’s rights, Kaitlyn also plans and organizes a women’s symposium on SMU’s campus.

Kaitlyn credits her participation in CHCI’s R2L NextGen program in helping her to get out of her comfort zone and believe that she too could be leader. While she was always interested in politics, CHCI helped her to gain confidence and encouraged her to get involved with her community. In the future, she sees herself being heavily involved in politics as a means to help her community and truly improve our country to make it the best it can be. She hopes that other young Latinos like herself will not let setbacks stop them from achieving their dreams.

CHCI knows that Kaitlyn will continue on this path of excellence and hopes that other students see her as the excellent role model she is. The CHCI familia is looking forward to seeing all that Kaitlyn will accomplish in her future!