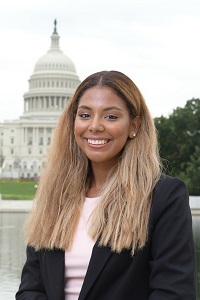 Karylena Cruz is a Dominican and Bolivian Afro-Latina born and raised in Silver Spring, Maryland. As a first-generation college student at the University of Maryland, she is majoring in Government and Politics and minoring in Spanish because of her passion for civic engagement and community organizing. Karylena worked for a local candidate fighting for minority groups in her community through advocacy on issues such as affordable housing, overcrowding in schools, public transportation, and minimum wage increases. She has learned that changing the nation starts by changing her neighborhood. Her love for grassroots organizing has led Karylena to join organizations such as the Silver Spring branch for Democratic Socialists of America, the Montgomery County branch for National Association for the Advancement of Colored People, and the Silver Spring Justice Coalition.

In the future, Karylena will continue advocating for vulnerable populations in her career as a public defender. As a CHCI Intern, Karylena hopes to gain knowledge on the legislative process as well as skills and tools she can incorporate into her local advocacy. She plans on utilizing this knowledge when she runs for her state government to better serve the people in her district.