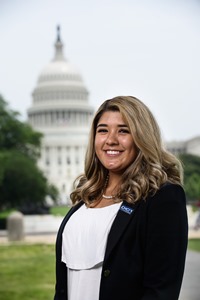 Kathia Jimenez was born in Walla Walla, WA to two incredible and hardworking Mexican parents who migrated from Jalisco, Mexico to the U.S. She has one younger brother whom she is very close to. Kathia became passionate about her Latinx heritage after attending college and realizing that her community was not represented on the level it needed to be. She works hard to make sure the Latinx and Multicultural community are visible on her campus through her outreach efforts.

Kathia is currently attending Washington State University and is majoring is Global Politics and Spanish.  She is very involved in her Multicultural community through her membership as a sister of Lambda Theta Alpha Latin Sorority, Inc. and her position on the United Greek Council as the Vice President of Public Relations and Alumni. Kathia likes to live her life through UGC’s motto of “United We Illuminate the World” and uses this as an influence in how to bring awareness and visibility to her growing community. As a CHCI intern, Kathia hopes to further her leadership and knowledge on education reform that community.