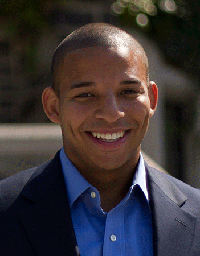 Kelvin Castillo – May 2013 Scholar of the Month

I was twelve, and in the eighth grade when my guidance counselor called me to her office to give me details about a program that I was selected for. The program, A Better Chance, enabled me to attend a highly ranked public high school in Madison, Connecticut for the duration of my schooling, in an effort to increase its diversity. That was the day that changed my life. It was there at Daniel Hand High School that I was surrounded, for the first time, by students that shared the same fervor and desire to learn as I did. Students who were not associating themselves with drugs or gangs, as some of my classmates back in New York. I did, however find out that it was more difficult to integrate than I initially imagined. In a community of upper middle class Caucasians, my ethnicity and economic standing was a difficult barrier for some students to see past. Nevertheless, I seized the opportunity and worked hard throughout my high school career, achieving numerous awards and scholarships such as the Chamber of Commerce Scholar. The culmination of my hard work came when I was accepted into a nationally ranked, and highly revered, undergraduate business program at Lehigh University.

At Lehigh, I found that the atmosphere was similar to that of Daniel Hand High School. I was immersed in a culture of learning. It would however, be naïve to assume that the university lacked all traces of ethnic or economic prejudice. It was here that I found my other passion outside of learning, advocating social change. I took advantage of all the opportunities that Lehigh could offer and won numerous awards. I take great pride in my school and want to make Lehigh the best it can be. For this reason, I decided to get involved and leave my own mark, becoming one of the founding members of a new Multicultural Greek Fraternity called Lambda Sigma Upsilon Latino Fraternity Incorporated. We have brought numerous programs to campus, focusing on diversity and education, such as a panel called “Three Faces Latino” which highlights differences in Latino/Hispanic subgroups. We also kicked off a new initiative called commUNITY with a performance called “NWC,” exploring stereotypes and biases that may prevent engaged dialogue and inclusivity amongst the Lehigh community.

I continue my efforts of involvement for social justice as a current graduate student in the Comparative and International Education Program at Lehigh University’s College of Education. It is important to create both a local and global initiative to create educational opportunities across many cultures and backgrounds. While fulfilling my responsibilities of my own education, I am able to aid those who were not as lucky as I was. The end that I hope to arrive at is a career with the United Nations or another policy making organization that can assist in creating global cultural awareness and acceptance. This in turn will work as a catalyst to create educational opportunities worldwide that span continents and backgrounds. I ultimately want to create a more efficient education system both nationally and abroad.