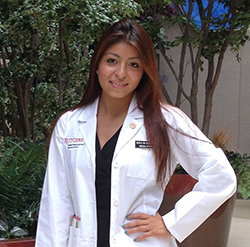 Kerly Guerrero was born in Ecuador and grew up in Harrison, NJ. She graduated magna cum laude from Seton Hall University with a major in biology and a minor in Latin American studies. She was very active during her undergraduate career, participating in the Biomedical Careers Program at Robert Wood Johnson Medical School (RWJMS) and the Summer Medical and Dental Education Program at Yale Medical School, as well as volunteering at Hospital Baca Ortiz in Quito, Ecuador. In the fall of 2012, Kerly was accepted into the Access Med program at RWJMS and, upon completion of the program, was accepted into its 2017 class. Her career goal is to practice medicine in an urban setting while providing care and mentorship to her community and the less affluent population.

Kerly is actively involved with her community. She has tutored GED students at La Casa de Don Pedro in Newark, NJ. She has also held executive positions in several student organizations including Chi Upsilon Sigma National Latin Sorority and the Minority Association of Pre-Health Students. In recognition for her contributions to the Latino community, Kerly has been recognized with the Perla’s Leadership scholarship from the Joseph A. Unanue Latino Institute, the Zulima V. Farber scholarship from the LUPE Fund Inc., and a scholarship from Organizaction Juventud Ecuatoriana.

In medical school, Kerly has remained active in community service and leadership. She became the president of the Latino Medical Student Association Chapter at RWJMS. She also worked with the community oriented Physical Activity System of Support program, which helped to promote physical activity among low-income Latinos diagnosed with diabetes. She was involved in programming participant visits and keeping participants engaged and motivated. Approximately 70% of participants completed the intervention and, among those who completed, 90% attended scheduled sessions. Her research addressed the challenges encountered when working with a low-income socio-economic group of people as well as the need for Spanish speaking staff. Her research found solutions to help overcome the financial, cultural, and social barriers that exist in the healthcare industry.

As a CHCI-United Health Foundation scholar, Kerly is participating as an intern at Promise Clinic. Promise Clinic is a student run free clinic that offers preventative medical care to the homeless and uninsured population of New Brunswick, NJ. This internship has given Kerly the opportunity to further understand the barriers that this population encounters to access quality medical care. These experiences are not only strengthening her medical knowledge but also giving her the tools necessary to better provide medical care to her community.

Kerly is the first person in her family to attend and graduate college in the United States. As a first-generation student, her upbringing has taught her the importance of education, opportunities, and humbleness. She is a well-rounded woman whose motivation for learning is to eventually have the capacity to help and teach others. She hopes to use the skills she has attainted through her experiences to mentor the younger generation of leaders and to motivate them towards overcoming adversity and empowering them to fulfill their educational and career goals.