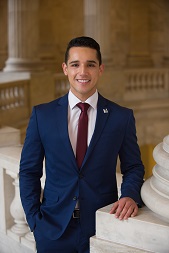 Raised in Koreatown, Los Angeles, Kevin Figueroa is the son to a U.S. Veteran from El Salvador and a mother from Guatemala, and eldest of three siblings. Kevin earned his high school diploma from the School of Business and Tourism in Downtown Los Angeles. Growing up, Kevin witnessed violence between gangs near his school and neighborhood. After finding a loaded gun wrapped in a black bandana near his high school and being held at gunpoint weeks later, he decided to dedicate his efforts to keeping youth off the streets.

After high school, Kevin enrolled in Los Angeles City College and East Los Angeles College simultaneously then transferred to the University of California, Berkeley, where he had the opportunity to work at the local level as a policy/research intern on housing policy with the city’s Rent Stabilization Board. Later that year, Kevin was selected by UC Berkeley’s Institute of Governmental Studies as part of the competitive Cal-in-Sacramento Fellowship program and completed a state-level internship with the Office of the President pro tempore of the California State Senate, Senator Kevin De Leon. In 2016, Kevin Figueroa graduated with honors and joined the Haas Institute for a Fair and Inclusive Society for a yearlong fellowship.

Kevin is one of the founders of the first all-inclusive Central American student organization at UC Berkeley, Central Americans for Empowerment (CAFE). The organization was created to develop academic dialogue on socio-economic issues, gang violence, the child refugee crisis, and human right violations affecting the Central American population within the states and abroad. Kevin hopes to go to law school and practice human rights law pertaining to the Latin American population and aspires to teach at a university someday.

As a CHCI Public Policy Fellow, Kevin seeks to learn from progressive leaders in government and enhance his understanding of policies that affect marginalized communities. Kevin is determined to further develop his critical and innovative thinking skills, as well as his teamwork skills, to effectively advocate for policies that uplift communities. As a first generation student, Kevin hopes to inspire his community by making it an effort to tutor and speak as a panelist on higher education so youth may choose a life of education and realize their potential.