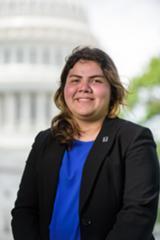 School: College of William and Mary

Leideen Escobar-Hernandez is a first-generation college student and the daughter of Salvadoran immigrants. Leideen was raised in predominantly low-income Latinx and African-American neighborhoods within the Washington, D.C area. She was exposed early on to the socio-economic challenges of the D.C immigrant population as they faced struggles including poverty, access and costs of higher education, healthcare, and immigration. These hardships, which impacted her own family, instilled the solidarity that inevitably led to her desire to better serve her underrepresented immigrant community.

Leideen currently attends The College of William and Mary in Williamsburg, Virginia where she is majoring in computational and applied mathematics and statistics and minoring in Russian post-soviet studies. Despite concentrating her studies in the STEM field, Leideen developed a passion for immigration and civil rights through her father’s undying love of history and government, her Capital City PCS history teachers, and her participation in S.M.A.R.T., a local D.C youth-led organization advocating for English Language Learner students within the DCPS system. She has continued her involvement on campus surrounding issues concerning her community through organizations like the WM Latin American Student Union and by becoming the 2017/18 Hispanic House RA. Upon graduation, Leideen hopes to attend law school to become an immigration lawyer aimed to help her underrepresented communities.

As a CHCI Intern, Leideen hopes to gain legislative knowledge, strengthen her leadership and communication skills, and to better advocate for her community in the future.