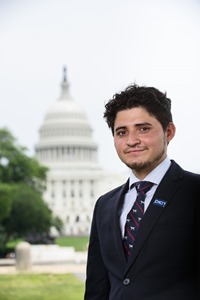 Lenni Joya-Amaya was born and raised in El Salvador. Lenni’s journey to the U.S. has been long – he immigrated alone to the United States while undocumented at age 14, travelling through Guatemala and Mexico before moving to Long Island, New York.

The experience of his immigration to the United States in search for his mother, father and siblings instilled in Lenni a greater value more the so-called “American Dream.” He is dedicated to working closely with issues regarding immigrants and the Hispanic/Latino community in the United States, especially since he personally experienced the struggles many immigrants go through.

Lenni is a first-generation college student. He’s currently a junior at Marist College in Poughkeepsie, New York, with a double major in Political Science and Spanish, a concentration in Bilingual Education, and triple minor in Global Studies, Italian, and Latin American and Caribbean Studies.

During his sophomore year, Lenni studied social movements and human rights in Buenos Aires, Argentina for a semester, where he had the chance to work as an intern with the United Nations under the UNHCR agency. He worked with immigrants and refugees arriving to Argentina, an experience that taught Lenni to research migration issues in other countries outside the United States. He also interned at the American Bar Association (A.B.A) under the Commission on Immigration in Washington D.C., helping undocumented immigrants detained by Immigration and Customs Enforcement (ICE) that did not have legal representation.

For his future, Lenni is planning to attend graduate school to study Education Development, and also considering pursuing international relations in another country or perhaps work with non-profit organizations that fight against hunger, poverty and the lack of good education around the globe. As a CHCI intern, Lenni is hoping to learn as much as possible regarding the American political system. Interning in Congress is going to give Lenni the opportunity to experience first hand how laws are made as well as the importance of them in the U.S.