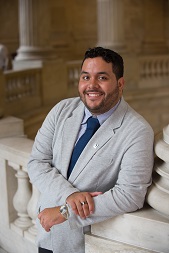 Coming from a Colombian, Mexican and Puerto Rican upbringing, Leonardo grew up in many cities in both the Southeast and Northeast United States. At age 13, Leonardo chose to permanently live with his father and three brothers in Smyrna, Georgia. Growing up in the South, Leonardo struggled with his identity as a gay Latino due to bullying and ignorance. Leonardo found his strength in academics and received the Goizueta Foundation Scholarship in 2013, and graduated from Georgia State University debt- free. At Georgia State University, Leonardo gained the necessary confidence and tools to fight for his beliefs and to stand proud in being a gay Latino.

It was at Georgia State University that Leonardo found his spark in working for the government and advocating for civil liberties such as Latino and LGBTQ rights. Leonardo conducted research investigating the positive relationship between Latino immigrants and economic factors. Additionally, as a senator for the university’s Student Government Association, Leonardo continuously advocated for LGBTQ students in the form of a resolution to expand the number of gender inclusive restrooms on Georgia State’s campus.

As a CHCI Public Policy, Leonardo aspires to define the specifics of what type of law to specialize in law school. Leonardo hopes to use both his research and policy experience to continue fighting for the rights of Latinos and LGBTQ individuals. Using the resources available in Washington, D.C., Leonardo hopes to advocate for children with disabilities and students who identify with the LGBTQ community within the United States education system.