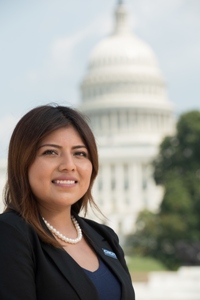 Leticia Herrera was born in Oaxaca, Mexico and in 2005, she migrated with her family to the United States in search of a better life. Coming to the United States has been a challenge for Leticia, as she has seen her parents work in 110-degree summer weather in the fields of Southwest California to support their family.

Leticia Herrera is a DACA recipient, and a current student at California State University, San Bernardino (CSUSB). In June 2019, Leticia will obtain a bachelor’s degree in Sociology and two certificates: one in Spanish Public Services and another in Social Services. She is a person committed to help and spread awareness about the Latinx community. She is an immigrant activist and serves as the Vice President of the student organization, Undocumented Advocates at CSUSB, where she advocates for the rights of undocumented immigrants.

Leticia is a Dream.Us national scholarship recipient and a COFEM scholar. Her work and dedication to her community have granted her the opportunity to serve as the California Delegate for Fuerza Migrante National Political Group and Paraprofessional of the Undocumented Student Success Center at CSUSB. Her passion for education, political change, and advocacy have been recognized by the 40th and 26th California Congressional Districts.

Recently she was selected to be congressman Pete Aguilar’s honorary guest for the 2018 State of the Union Address. She was also selected to share her story when several congressmembers introduced legislation through the “Queen of the Hill” rule to pass a permanent solution for millions of dreamers.

Leticia is a dedicated person and even with her on campus and community involvement, she still manages to maintain an outstanding GPA. She has been selected this year for two honor societies, Order of Omega and Alpha Kappa Delta. Leticia has also been recognized for her hard work as Campus Leader of the Year by Lambda Theta Alpha Latin Sorority, Inc.

As a CHCI intern, Leticia hopes to acquire the tools necessary to network and serve as an example for underserved populations.