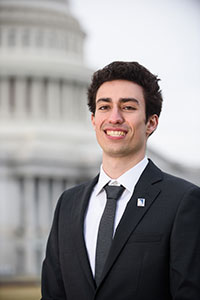 Louis Epstein is from Haddonfield, New Jersey. He was raised in a diverse family household, both Colombian and Jewish-American. He is currently in his third year at Brown University, studying International Development and Latin American studies. He runs the Food Recovery Network on campus and is a fellow at the Center for Latin American and Caribbean Studies. He’s worked on questions of agricultural development in the Philippines as well as food security in Colombia.

After graduation, he expects to work on human rights, rural economic development, and inequality issues across Latin America. He’s interested in learning more about the peace process in Colombia as well as the broader influence of American foreign policy around the world.

As a CHCI intern, he plans to learn about effective policymaking to use these skills in Latin America.