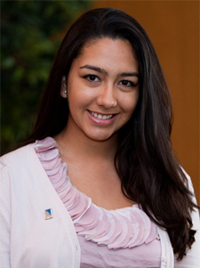 November 2014 Junior Alumnus of the Month

College junior Maria Isabella Paez participated in R2L NextGen during the inaugural program four years ago. Since then, she has successfully graduated from high school and is now in her third year at Boston University in Massachusetts studying International Relations with a concentration in Systems and World Order and Latin American Studies. For Maria, participation in CHCI’s R2L NextGen reinforced the importance of civic engagement.

After her program participation, Maria became the Student Government President and continued her involvement in the community with the National Honor Society. In high school she completed over 200 hours of volunteer time with various groups including the Girl Scouts, Ronald McDonald House Charities, the Special Olympics, and Fairchild Botanical Gardens. Being civically involved was at the core of Maria’s passion and the R2L NextGen program allowed her to see that these issues also mattered to her peers, other young people across the country.

When Maria enrolled at Boston University, she planned to study communications; however, the more that she wrote and expressed her opinions on issues that were important to her, the more she yearned for a solution. Shortly after her first year, Maria changed her major to International Relations. Maria credits her participation in R2L NextGen as a source that validated her passion to be a change agent in her community.

Five years from now, Maria aspires to be knee-deep in rural development and working for an international organization, perhaps in her home country of Colombia. Maria’s long-term goal is to pursue a graduate degree in urban development, business, education, or public policy, and to become involved in politics to help shape policies that affect the international community.