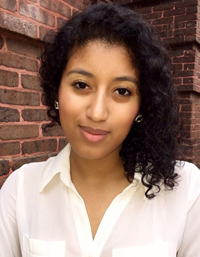 Mariam G. Lopez Rosales was born in Honduras and moved to North Carolina when she was seven years old. Her mother always stressed the importance of an education.

Mariam is going to be a junior at Elon University, majoring in broadcast journalism with double minors in Spanish and business administration. As a proud Latina, she is an active member of the Latin American Student Organization (LASO) at her campus. As an exemplary community leader, this past semester she had the opportunity to become a residence life assistant (RA). As a RA, Mariam worked as a community developer to help broaden the educational, living, and learning experience of 35 residents by organizing community events and informing them about important campus and local matters.

Miriam’s passion is journalism and reporting, which has motivated her to join Elon Local News, the student media organization on campus. She loves working with this organization because it allows her to experience the thrill of broadcasting. Thus far, she has gained valuable experience conducting interviews, operating professional cameras and broadcasting equipment, and leading various projects. This experience has affirmed her belief that she can empower others through reporting by giving them a voice to tell their stories.

After graduation, Miriam hopes to obtain a job as a reporter and work her way up to one day become an accomplished news anchor for a Spanish network. She also wants to pursue a master’s degree in business administration.

With the help of CHCI, Mariam has been given invaluable support since 2013, after she got the scholarship award for her community involvement and leadership potential. CHCI has further contributed to her professional development as she was selected for the 2015 CHCI-Telemundo Scholar-Internship in Miami. For Mariam it has been a dream come true to be working at one of the largest American and Spanish language broadcast television networks. Interning at Telemundo has given her the opportunity to learn from renowned reporters as they cover different news stories as well get hands-on experience about the different areas of the newsroom.

Mariam is beyond grateful for the CHCI Scholar-Internship opportunity because it has given her invaluable chances to grow professionally in her field of study and do what she loves. Every day is different at the newsroom, and that is the most exciting part of the internship for her. Mariam appreciates the opportunity to be interning with such an important news organization as well as for all the support CHCI has given her.