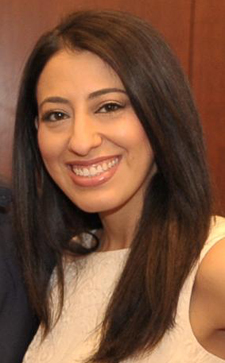 My family immigrated to the United States from Guadalajara, Jalisco, Mexico when I was 3 years old. Although my father was a professional in Mexico, he made the most difficult decision to leave his family and friends behind in order to provide a better life for his wife and four children. Like many immigrants, my parents worked in the fields of Southern California and ultimately benefitted from the Reagan amnesty. Our family moved to the more affordable city of Las Vegas, Nevada when I was 8 years old. Nevertheless, my family faced the same socioeconomic and cultural challenges that other immigrants face. I attended Title I public schools and had no idea whether college would be an option for me. I worked hard and ultimately became the first student in my high school to be admitted to Georgetown University.

Attending Georgetown was the best decision I’ve ever made. It forever changed my life as it opened my eyes to a world I had never seen and it exposed me to a different set of challenges. My Title I public school education had not prepared me for the academic rigors of Georgetown. I spent many of my college years using the services of tutors and trying to assimilate into a very privileged, highly accomplished, and very influential international community. Again, I worked hard and ultimately graduated with honors.

As a professional Latina, the challenges have been different as I’ve tried to establish my sense of identity in a professional world where few share my background and experiences—all while still trying to honor my language, culture, traditions, and humble beginnings.

At the time I attended college, my parent’s combined annual income was less than the price of the annual tuition at Georgetown. Although Georgetown gave me a full ride scholarship, I would not have been able to afford my traveling costs and book costs without the CHCI scholarship.

After graduating from Georgetown with a double major in Government and English, I worked at GMMB, a political consulting and communications firm in Washington, D.C. I helped provide communications counsel to the education division of the Bill & Melinda Gates Foundation.

I then left GMMB to attend the American University Washington College of Law. While in law school, I clerked for a prominent law firm in Nevada. I also clerked for the public policy office of MALDEF in Washington, D.C. and for the Honorable Judge Marisa J. Demeo on the Superior Court of the District of Columbia.

After graduating from law school, I returned to Nevada to serve as the Deputy Operations Director of the Nevada State Democratic Party in an effort to help re-elect our Senate Major Leader Harry Reid (D-NV).

I then served as a Clark County Public Defender in Las Vegas for three and a half years. In this capacity I represented hundreds of indigent clients accused of misdemeanor, gross misdemeanor and felony charges. I managed a high volume of cases throughout all stages of litigation, including arraignments, competency hearings, preliminary hearings, bench trials, jury trials, entry of pleas, sentencings, and probation revocation hearings. I also oversaw criminal investigations, competency evaluations, and social worker requests, and managed relations with clients’ families, mental healthcare providers, substance abuse counselors, and law enforcement. Additionally, in January 2014, I was appointed to serve on the Nevada Attorney General’s Council for Prevention of Domestic Violence.

Although serving as a public defender was both challenging and rewarding, my heart remained in the political process. Thus, as recent as of December 2014, I relocated to San Francisco to serve as AIPAC’s Pacific Northwest Regional Progressive Outreach Director.

As a college student, CHCI provided me the financial assistance to pay for my education. But more importantly, it exposed me to an invaluable network of professionals throughout the country that have served as my friends, mentors, and colleagues to this day. Simply stated, I would not be here without CHCI.

I remain active in the CHCI family by mentoring younger alumni who are pursuing similar career paths.

In March 2014, I was honored to serve as the CHCI alumni speaker at the annual board of directors luncheon in Las Vegas where I finally had an opportunity to personally thank CHCI for selecting me as their scholarship recipient 12 years ago.

I attend as many functions as I possibly can and will continue to work with other alumni to establish CHCI chapters in our communities.

On a professional level, I intend to remain politically active and continue to influence public policy at the local, state, national, and international level.

I also hope to continue to develop my passion to empower and motivate young women and help them become strong, independent thinkers and leaders in the world.

Thankfully I learned early on in my career that we cannot help others without first helping ourselves. CHCI participants, by nature, are hard-working, goal-driven, and ambitious leaders. However, in order for us to be effective in the long run, we must learn to maintain a work-life balance. This includes investing time both in our professional and personal growth and continuously spending quality time alone to reflect on our life’s purpose and journey.