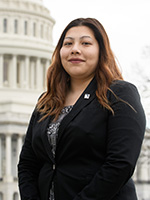 Mariel De Paz was born in Mexico City, Mexico and immigrated to the United States with her mom and brother when she was six years old. Mariel’s family has been her motivation to continue her education and become a first generation college graduate. Mariel was raised in an immigrant community in South San Francisco, California where she was exposed to the needs of the community, which sparked her interest in civic engagement.

Mariel is currently a junior at San Francisco State University where she is pursuing a bachelor’s degree in political science. She is involved with an organization on campus focused on advocating for undocumented students called Improving Dreams, Equity, Access, and Success (I.D.E.A.S) where she served as secretary. Mariel was also part of the DreamSF Fellowship in San Francisco where she worked for the Labor Center for Immigrant Justice. This experience gave her the opportunity to work with immigrant union members, asssit with outreach projects, and provide legal resources for the workers and their families.

As a CHCI Intern, Mariel hopes to strengthen her leadership and networking skills while also expanding her knowledge on public policy so she can better assist her community. Mariel aspires to become a Juvenile Probations Officer, pursuing a career that is built around the foundation of helping to improve her community.