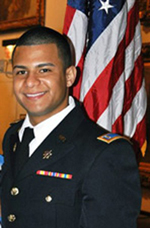 Originally from Miami, Mario Flores moved to Chicago after transferring from the University of Miami to DePaul University, where he earned his Bachelor of Science in commerce with a concentration in finance and business management.

During his undergraduate studies, Mario was a member of the nation’s largest Latino-based fraternity, Sigma Lambda Beta International Fraternity. Mario served as partner in charge in PWC’s annual xTax case competition and as a member of the Midwest Association of Hispanic Accountants. He was also a member of Model Illinois Government and head counsel in the annual Moot Court competition during Illinois’s mock government simulation.

As a Hearst Scholar, Mario was the recipient of the National Hispanic Institute Scholarship, U.S. Army ROTC Scholarship, and the Fitzgerald Academic Scholarship. He was nationally recognized as an inductee to The National Dean’s List as well as being included on his campus’ Dean’s List.

Mario was commissioned as a Second Lieutenant in the United States Army, serving as a Military Intelligence Officer in the Army ROTC program; this program trained him to effectively lead American soldiers. As an undergraduate student, Mario held full-time positions at P.A.C.T.T. Learning Center and T-Mobile.

As a CHCI Public Policy Fellow, Mario hopes to push the envelope on Latino leadership and foster credibility in the Latino community. He is committed to working with policies affecting immigration, education, armed services, and intelligence.