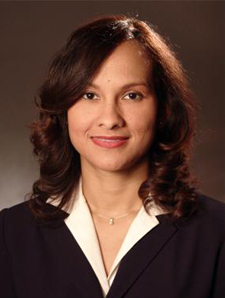 My journey is the journey of millions of Latinos who grew up in this country as children of immigrant parents. My mom, a nurse by profession, immigrated in 1970 alone. I was raised along with my two older brothers by my grandmother and aunt in Cali, Colombia. In 1979, the family was reunited when we immigrated to the U.S. to live in Newark, New Jersey. My mom had remarried and we had a new addition to the family, my younger sister. Growing up in Newark was filled with adversity and struggle. As the only Colombian family living in our neighborhood and the only Colombiana at the local elementary school, it was certainly a culture shock. My classmates had never met a Colombian national before, and even my teacher thought that I was born in the District of Columbia! I was bullied and harassed for not being able to speak English and the only friends I had were a brother and sister who had also just emigrated from the Dominican Republic. They also faced the same childhood immigrant experience, so we bonded. Eventually, we moved to another part of town, and my mom was now a single-parent working two jobs to put food on the table. These were difficult times. We often shopped at consignment stores and wore gently-used clothes handed down by family friends. Within a year of living the U.S., I learned to speak English, to the point where in seventh grade I was promoted to the highest reading level in my class. I excelled in my studies, both in elementary and high school, which eventually led me to apply to college and later on to graduate school. This trajectory however, would not have been made possible without the foresight, tenacity and determination that my mother instilled in each of us–the value of education as a means to an end–the ticket out of the inner-city and success in life. She always said to us, “camarón que se duerme se lo lleva la corriente,” and always pushed us to excel, to dream, to achieve. I also need to acknowledge the many dedicated mentors whom from the early days of my career were there providing counsel and advice. Today, all of my siblings are college graduates. My oldest brother is a geneticist, my other brother works for United Airlines, and my youngest sister is a physician currently specializing in GYN-Oncology at Brown Medical Center. As for me, I graduated from college and was the first in my family to obtain two Master’s Degrees.

My major in college was Political Science with a minor in Spanish. I have always been intrigued by the way government works and how it impacts our everyday lives. I came across the CHCI Fellowship program while working on my first Master’s Degree at the Center for Latin American and Caribbean Studies (CLACS) at New York University. At the time there was no “Google”, “Yahoo”, “Facebook” nor “Twitter” to look for potential internships or fellowship opportunities online. You had to do the legwork and research them on a university bulletin board, at the career student center, or at the library. I found out about CHCI from a brochure posted on a university bulletin board. I read the selection criteria for the nine-month fellowship program, and thought that given my academic and volunteer experience (e.g. volunteered for various local and national political campaigns such as the 1992 Clinton-Gore campaign, where I registered 1,000 people to vote in the City of Newark), I would be an ideal candidate for the fellowship program. So I applied, and got accepted into the program in 1993. I had the honor of serving my nine month placement in the Office of Congressman Robert Menendez during his first term at the U.S. House of Representatives. Programs such as those of CHCI are extremely important for Latino youth to help open the doors to opportunities for personal and professional growth.

After CHCI, I worked for the Essex County Surrogate’s Court as public affairs officer where I was responsible for developing community outreach efforts to inform the public about the services provided by the Surrogate’s Court. Later I joined the United Way of Essex and West Hudson, where I worked for seven years in various capacities with increased levels of responsibility including Director of the Newark Enterprise Community Resource Development Center, which served over 300 non-profit community based organizations with capacity building efforts. I was then recruited by the University of Medicine and Dentistry of New Jersey (UMDNJ) Foundation as Director of Development. (UMDNJ merged with Rutgers University in 2013.) Most recently, I joined the Hispanic Federation (HF), as Vice President of Development. HF is a leading national Latino non-profit with a mission to advance and empower the Latino community. HF partners with nearly 100 Latino community-based member agencies to promote advocacy, policy and implement programs addressing issues such as education, immigration, economic empowerment, health, civic engagement, and the environment. With offices in Washington, D.C., New York, and Hartford, CT, HF reaches over one million people.

CHCI was a watershed moment in my life. It opened a whole new world to me in ways that I would have never imagined possible. Working on Capitol Hill provided me with intimate knowledge of the inner workings of our system of government and how it has the power to impact the lives of every American. Also of note was the exclusive access all the participating CHCI Fellows had to national Latino influentials and thought leaders who served as role models and mentors. It was simply one of the most rewarding experiences in my professional career. One of the many significant projects that I worked on was a study on the impact of healthcare reform in New Jersey’s 13th Congressional District. At the time, First Lady Hillary Clinton was spearheading an overhaul of the nation’s health care system and it was an opportune moment to assess the healthcare needs of the district and how healthcare reform would help meet those needs. Findings from the study were used as reference by Congressman Menendez in several committee hearings and helped formulate recommendations for more equity in the way we delivered health care to medically underserved populations.

It is important to give back. One should never lose sight of where they came from. I learned early on about the power of giving back. While growing up in Colombia, during Christmas, my grandmother had me bring plates of what we called “desamargado” a concoction of sweet figs, tart grapefruit and lemon preserves served with “manjar blanco” milk caramel and buñuelos, to each of our neighbors as a way of being grateful for their friendship and just because she wanted to make people happy. That display of kindness always resulted in someone always looking out for our family in a country that was known for much insecurity. Today, I look back and think of how giving back became such a part of my DNA to a point where when I graduated from high school, I had been one of the most active students participating in extracurricular activities that promoted volunteer opportunities such as mentoring elementary school children in a local afterschool programs and neighborhood beautification projects. I remember that “giving back” and “volunteering” was such an important aspect of the CHCI program that I actually wrote an article in our Fellowship Newsletter on the importance of giving back to the community. After the fellowship was over, I returned to New Jersey and continued to be an active volunteer in many civic organizations such as becoming President of the Colombian American Alliance, the Colombian American Organizations of New Jersey, and most recently President of the LUPE Fund, New Jersey’s largest Latina professional organization dedicated to engaging, educating and empowering women. I also felt it was important to serve on boards, and most recently, I served on the Board’s Executive Committee of the United Way of Greater Union County where I was able to network and meet some incredible corporate leaders who are making a positive impact in communities in need.

Right now, I am dedicating my time to the incredible opportunity I am undertaking at the Hispanic Federation–to help leverage much needed philanthropic dollars to help Latino children, families and individuals fulfill the American dream.

Find your calling! Do what you enjoy! Have short and long term career goals early in your career to help you create the path to a successful and rewarding profession.